Accusations online that Google had deleted Palestine from its Maps facility prompted the internet giant to explain that the country “has never been” on the service.

The row came after a glitch caused the West Bank and Gaza to briefly disappear from Google Maps.

Palestine, although recognised as a country by the United Nations, has never been on Google Maps. Instead of being demarcated with a solid line that denotes a country border, Google instead defines the Gaza Strip and the West Bank with a dashed border – the mark it uses to outline disputed territories.

Google was forced to explain that it doesn’t define Palestine as a country separate from Israel on Maps after a petition signed by 250,000 people described the company’s “airbrushing” of Palestine as “deeply offensive” and called for the internet giant to put Palestine on its map.

A glitch that briefly removed the labels for the West Bank and Gaza sparked outrage on social media, with people tweeting under the hashtag #PalestineIsHere.

Dear #Google , Where is #Palestine? You cannot erase an entire country! #palestineishere 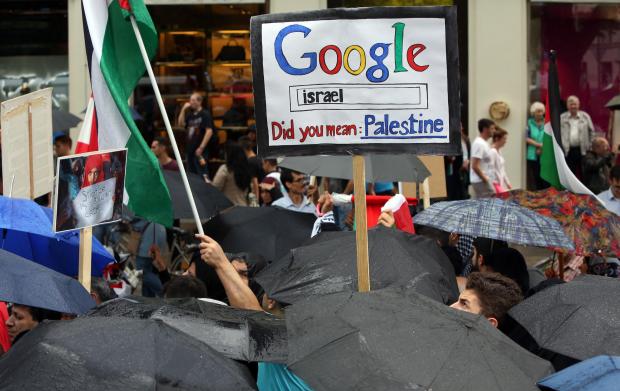 WHY did u do that Google??#PalestineIsFree#PalestineIsHere#BoycottGoogle

The Change.org petition accused Google of being “complicit in the Israeli government’s ethnic cleansing of Palestine” by marking the conflicted area with a dotted line that denotes a problematic border.

“Google Maps is now regarded as definitive by people around the world, including journalists, students and others carrying out research into the Israel-Palestine situation,” said the petition. “Recognition of Palestine by Google may even turn out to be as important as recognition by organisations like the UN.”

Google said in a response that Palestine had never been marked as a territory on its map, but that a glitch in the software had resulted in Palestinian areas being removed.

“There has never been a ‘Palestine’ label on Google Maps,” said a spokesman for Google. “However, we discovered a bug that removed the labels for ‘West Bank’ and ‘Gaza Strip’. We’re working quickly to get these labels back to the area.”

Back in 2013 Google “followed the lead of the UN” and updated the Palestinian version of its Search homepage with the description “Palestine” as opposed to “Palestinian Territories”. In a significant mile stone in the conflict, the Palestinian flag was raised at the UN’s headquarters last year.

Posted by Meta Peace Team on August 30, 2016 in Uncategorized.

Meta Peace Team pursues peace through active nonviolence in places of conflict. We seek a just world grounded in nonviolence and respect for the sacred interconnectedness of all life. Our Goals: - Educating the public to the vision and practice of active nonviolence, particularly as it relates to nonviolent conflict intervention - Providing training in active nonviolence designed for the specific needs of the participants - Recruiting, training, and placing Peace Teams both domestically and internationally - Cooperating, supporting, and participating with local peace and justice groups, particularly as it relates to our mission
View all posts by Meta Peace Team »